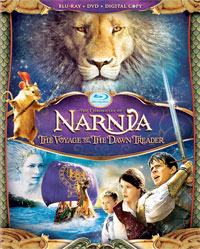 20th Century Fox Home Entertainment has just announced the upcoming release of The Chronicles of Narnia: Voyage of the Dawn Treader, scheduling the film for DVD and Blu-Ray Disc in April.

Precocious siblings Lucy (Georgie Henley) and Edmund Pevensie (Skandar Heynes), along with their cousin Eustace (Will Poulter), are swallowed into a painting and transported back to Narnia. They join King Caspian (Ben Barnes) and a noble mouse named Reepicheep in a quest to rescue noble lords who had been lost fighting evil on another island. Aboard the magnificent ship The Dawn Treader, the courageous voyagers travel to mysterious islands, confront mystical creatures, and reunite with the Great Lion Aslan on a mission that tests their characters to determine the fate of Narnia itself!

The movie will be available as a single-disc DVD, featuring the movie, along with Deleted Scenes and a Audio Commentary by Director Michael Apted and Producer Mark Johnson.

Alternatively, you can also get the movie as a 2-disc DVD version, featuring the same disc, along with a second disc that contains a large number of Featurettes, the Animated Short “The Untold Adventures of The Dawn Treader” as well as King Caspian’s Guide to the Dawn Treader. Further included are 5 Islands Explorations and a Sword Game.

On the Blu-Ray version you will get all of the above, naturally, along with more supplements, such as Deleted Scenes and additional Featurettes, plus a Digital Copy of the movie.