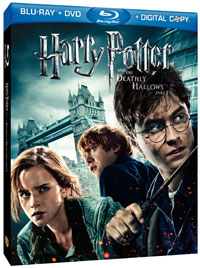 Warner Home Video has announced the release of Harry Potter and the Deathly Hollows: Part 1, bringing the move ot DVD and Blu-Ray Disc in April.

Harry, Ron and Hermione set out to track down and destroy the secret ot Voldemort’s power – the Horcruxes. On their own and on the run, the three friends must now rely on one another more than ever… but Dark Froces threaten to tear them apart.

Arriving as a Blu-Ray and DVD combo pack, the release also features an Exclusive Sneak Peek of an opening scene from the final film, as well as the Featurettes ”On the Green with Rupert, Tom, Oliver and James,” “The Seven Harry’s” and “Dan, Rupert, and Emma’s Running Competition”.

Further, the release contains Additional Scenes and the WaterTower Music Behind The Soundtrack featurette

The disc will be rounded out by Warner’s Maximum Movie Mode where you can join host Jason Isaacs (Lucius Malfoy) and several walk-on cast & crew guests to unravel the mysteries of the Dark Lord’s past and discover the keys to his defeat before it is too late! Focus Points of that journey are “The Last Days of Privet Drive,” “Hagrid’s Motorbike,” “Amazing (or) Magical Tents!,” “Deatheaters attack Cafe,” “Creating Dobby and Kreacher,” “Godric’s Hollow,” “The Harry And Nagini Battle,” “The Frozen Lake” and “The Return of Griphook.”