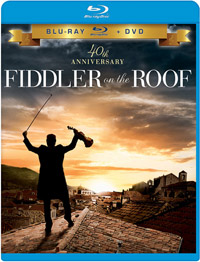 MGM Home Entertainment has just announced a 40th Anniversary Edition of Fiddler On The Roof, scheduled to arrive in April.

Tevye (Topol) is a poor milkman in czarist Russia, where he provides for five unmarried daughters and a sharp-tongued wife. faced with mounting financial strain and growing anti-Semitism, Tevye strives – like a fiddler on a roof – to maintain balance despite the precarious nature of his situation.

Featuring a 1080p high definition transfer with a new DTS 7.1 HD Master Audio track, the release will also contain an Audio Commentary by Director Norman Jewison and star Topol, as well as a Deleted Song, a number of Featurettes and Historical background.