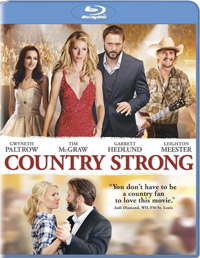 Sony Pictures Home Entertainment has added <>Country Strong to their release line-up, also, scheduling the film for release on DVD and Blu-Ray Disc in April.

Soon after a rising young singer-songwriter (Garrett Hedlund) gets involved with a fallen, emotionally unstable country star (Gwyneth Paltrow), the pair embark on a career resurrection tour helmed by her husband/manager (Tim McGraw) and featuring a beauty queen-turned-singer (Leighton Meester). Between concerts, romantic entanglements and old demons threaten to derail them all.

The DVD version will offer Deleted Scenes and the Original Ending, along with the Country Strong Soundtrack. Also included is an Extended Performance of “Shake That Thing” and Music Videos of “Country Strong” and “A Little Bit Stronger”.

The Blu-Ray version will contain the same bonus materials as the DVD version but spice it up some more by including also Sony’s movieIQ™+sync featuring the “Country Strong” playlist, as well as the Featurettes ”Friends In High Places: The Cast of Country Strong,” “Putting the Words in Their Mouths: The Songwriters” and ”A Little Bit Country: The Costumes”.