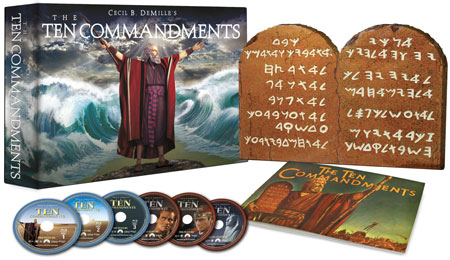 The other day we told you about a Blu-Ray release of The Ten Commandments that Paramount is currently preparing for release. Here now, we have a look at the incredible packaging that this gift set will arrive in. Monumental and epic barely manage to describe it… but see for yourself!

For sheer pageantry and spectacle, few motion pictures can claim to equal the splendor of Cecil B. DeMille’s 1956 remake of his epic The Ten Commandments. Filmed in Egypt and the Sinai with one of the biggest sets ever constructed for a motion picture, this version tells the story of the life of Moses (Charlton Heston), once favored in the Pharaoh’s (Yul Brynner) household, who turned his back on a privileged life to lead his people to freedom. With a rare on-screen introduction by Cecil B. DeMille himself.

To commemorate the 55th anniversary of this beloved masterpiece, Paramount Home Entertainment will release a fully restored version in high definition for the first time ever in an extravagant six-disc Blu-ray/DVD Combo gift set, as well as in a two-disc Blu-ray and two-disc DVD.

The 6-disc Blu-Ray/DVD Gift Set will be packaged in a stunning limited edition box featuring an image of the Red Sea that parts when the box is opened to reveal two tablets, which encase all six discs in the set. It will feature the movie spread across two discs, presented in 1080p high definition with DTS 5.1 HD MAster audio track. It will be accompanied by an optional Commentary Track by Katherine Orrison, author of Written in Stone: Making Cecil B. DeMille’s Epic The Ten Commandments.

In addition, the release will include the Newsreel The Ten Commandments Premiere in New York as well as the movie’s Theatrical Trailers

On the third disc of the set you will find a high definition presentation of the 1923 version of the feature film, complete with a Commentary Track by Katherine Orrison, Photo Galleries for both movies, as well as the Documentary ”The Ten Commandments: Making Miracles”.

The other three discs in the 6-disc set duplicate the contents from the three Blu-Ray Disc, only in DVD format.

Alternatively, the film will be released as 2-disc Blu-Ray or DVD versions also, featuring only the 1956 feature film with the commentary track and Newsreel footage.