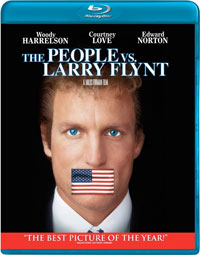 Image Entertainment has just added a Blu-Ray version of The People Vs. Larry Flynt to their title line-up, releasing the film in April.

You may not like what he does, but are you prepared to give up his right to do it?

Based on a true story of the notorious Hustler publisher who was sued by the Religious Right and paralyzed by a fanatic’s bullet, The People Vs. Larry Flynt is a stranger-than-fiction comedy about one man’s outrageous public persona and eccentric private life. The film chronicles Flint’s raunchy business savvy, his wildly unconventional marriage and his infamous courtroom antics.

No information has been made available yet regarding specs and features on this release, but it is fairly safe to assume that we will find the supplements from the recent DVD Special Edition on this disc also.