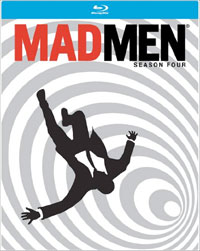 Welcome to a Mad New World. Season Four of Mad Men, 3-time Emmy® winner for Outstanding Drama Series and winner of 3 consecutive Golden Globes®, returns for a new year rife with possibilities. Last season stunned fans with its cliffhanger finale, as Don Draper’s professional and personal lives unexpectedly imploded. In Season 4, Jon Hamm and the rest of the breakout ensemble continue to captivate us as they grapple with an uncertain new reality.

Arriving on 3 discs with a 1080p high definition transfer, no bonus materials have been announced for the release when it will hit stores on March 29 for $49.97.