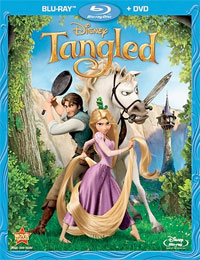 Buena Vista Home Entertainment has just added Tangled to their line-up, bringing the animated movie to DVD and Blu-Ray Disc in March already.

Disney presents a new twist on one of the most hilarious and hair-raising tales ever told. Your whole family will get tangled up in the fun, excitement and adventure of this magical motion picture. When the kingdom’s most wanted – and most charming – bandit Flynn Rider hides in a mysterious tower, the last thing he expects to find is Rapunzel, a spirited teen with an unlikely superpower – 70 feet of magical golden hair! Together, the unlikely duo set off on a fantastic journey filled with surprising heroes, laughter and suspense. Let your hair down and get ready to cheer for “Tangled.”