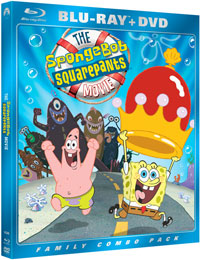 Paramount Home Entertainment has just added The Spongebob Squarepants Movie to their release line-up, bringing the yellow character to Blu-Ray for the first time.

There’s trouble bubbling up in Bikini Bottom, King Neptune’s crown is missing, and Mr. Krabs has been accused of stealing it! Together with his best pal Patrick, SpongeBob sets out to treacherous Shell City to reclaim Neptune’s crown and save Mr. Krabs.

Arriving as a Blu-Ray/DVD combo, the release will feature a 1080p high definition transfer with DTS 5.1 HD Master Audio. A solid number of bonus materials will be included on the disc, such as the Featurettes ”The Absorbing Tale Behind The SpongeBob SquarePants Movie,” “The Case of the Sponge “Bob”,”Anamatics,” “Saving The Surf,” “Inside The Pineapple” and “The Making of The Flaming Lips “SpongeBob and Patrick Confront the Psychic Wall of Energy” Music Video “.

Further you will find the actual Flaming Lips Music Video as well as a variety of Trailers and Teasers.

“The Spongebob Squarepants Movie” arrives in stores on March 29 for $26.98.