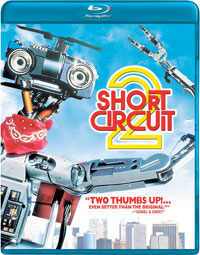 Image Entertainment has secured the rights from Sony to bring the comedy Short Circuit 2 to high definition, releasing a Blu-Ray version in March.

Number Five, aka Johnny Five, that incredible, lovable robot form the smash hit “Short Circuit,” is back and taking the big city by storm in this action-packed comedy adventure. Upbeat Johnny’s out for some “urban input,” but some street hoods, a greedy banker and a gang of crooks see his naiveté as their high-tech ticket to easy street. Will Johnny survive the big bad city and its big, bad city slickers? Keep your wires crossed when you switch on this high voltage film.