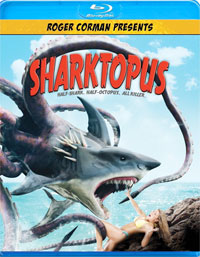 The SyFy Original movie Sharktopus has eaten its way up the food chain andis slated for release on DVD and Blu-Ray Disc in March, courtesy of Anchor Bay Entertainment .

It is known as S-11, a diabolical hybrid of shark and octopus created by genetic scientist Nathan Sands (Eric Roberts) as the U.S. Navy’s next super-weapon. But when its control implants are damaged during a training experiment, the beast escapes to Puerto Vallarta, Mexico for a taste of sun, sand, bikini babes, jet-skiers, spring breakers and beyond. Now a hotshot mercenary, an investigative reporter, and Sand’s biomechanical engineer daughter must stop a creature like none ever witnessed before: It has superior intelligence. It attacks without warning. And it likes to snack on bungee jumpers.

The DVD version features an anamorphic widescreen version with Dolby Digital 5.1 audio and will also contain a Commentary Track with Producers Roger Corman and Julie Corman, as well as the film’s Trailer.

The Blu-Ray version features a 1080p high definition transfer with DTS 5.1 HD Master audio and will also arrive featuring the Commentary Track with Producers Roger Corman and Julie Corman, and the film’s Trailer.