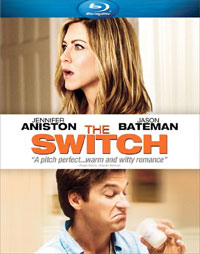 Lionsgate Home Entertainment has included The Switch in their line-up, bringing the comedy to DVD and Blu-Ray Disc in March.

Friendship, fertility and family take a funny new turn in “The Switch,” starring Jennifer Aniston and Jason Bateman. Kassie (Jennifer Aniston) is a smart, fun-loving single woman who, despite her neurotic best friend Wally’s (Jason Bateman) objections, decides it’s time to have a baby – even if it means doing it herself…with a little help from a charming sperm donor (Patrick Wilson). But, unbeknownst to her, Kassie’s plans go awry because of a last-minute switch that isn’t discovered until seven years later…when Wally gets acquainted with Kassie’s cute – though slightly neurotic – son.

The release will include Deleted Scenes and an Alternate Ending as well as a set of Bloopers.