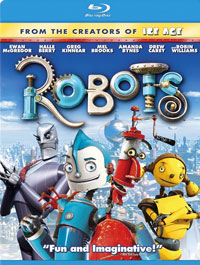 20th Century Fox Home Entertainment has just added the animated movie Robots to their schedule, bringing the film to Blu-Ray for the first time in March.

With the help of his misfit mechanical friends, a small town robot named Rodney embarks on the adventure of a lifetime as he heads for the big city to pursue his dreams – and ultimately proves that anyone can shine no matter what they’re made of.

Featuring an all-star voice cast (Ewan McGregor, Halle Berry, Greg Kinnear, Mel Brooks, Amanda Bynes, Drew Carey, and Robin Williams) and a groundbreaking visual style that pushes the boundaries of animated filmmaking. Robots is a dazzling, fun-filled feast for the eyes and a riveting good time for all ages

Although no exact specs have been announced yet, it is safe to assume that Fox will include all the bonus materials from the original DVD release on this release.