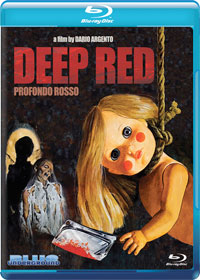 As we pointed out in this announcement some time ago, Blue Underground will release Dario Argento’s Deep Red on DVD and Blu-Ray Disc in April. Now, the studio has unveiled a new cover design for the release, replacing the blood dripping first cover artwork that was initially planned for the release.

An English jazz pianist living in Rome witnesses the brutal hatchet murder of a renowned psychic and is quickly drawn into the savage crime. With the help of a tenacious female reporter, the pair track a twisted trail of deranged clues and relentless violence towards a shocking climax that has ripped screams from the throats of audiences for more than 35 years!

“Deep Red” is widely considered by both fans and critics alike to be Dario Argento’s true masterpiece. Now this classic shocker has been newly transferred in stunning High Definition from its original camera negative, and is presented here in the Uncensored English Version and Full-Length Italian Director’s Cut for the first time ever!

In addition to the film itself, the releases will also feature Interviews with Co-Writer/Director Dario Argento, Co-Writer Bernardino Zapponi and Goblin (Claudio Simonetti, Massimo Morante, Fabio Pignatelli & Agostino Marangolo). Further you will find the Goblin Music Video “Profondo Rosso” (2010) and the Daemonia Music Video “Profondo Rosso” (Directed by Sergio Stivaletti) on the release, along with the U.S. Trailer and the original Italian Trailer.