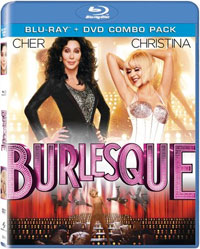 Sony Pictures Home Entertainment has just added Burlesque to their release line-up, bringing the musical to DVD and Blu-Ray Disc in early March.

A small town singer, Ali (Christina Aguilera), moves to the big city for her chance at stardom where she is enchanted by Burlesque, a glamorous nightclub packed with dancers, sizzling music, and an owner (Cher) in need of a star. Jam-packed with visually stunning musical numbers and an all-star cast featuring Eric Dane, Kristen Bell and Stanley Tucci.

The DVD version will feature a Commentary Track by director Steve Antin, as well as an Alternate Opening. Further you will find The Burlesque Lounge: Alternate Full Musical Performances on the disc, along with a Blooper Reel.

The Blu-Ray version will feature the same bonus materials as the DVD version, but will add a series of Featurettes on top, with titles such as ”Burlesque is Back!,” “The Performers: The Cast of Burlesque,” “Setting the Stage: Production Design & Performers,” “Inside the Dressing Room: Creating the Burlesque Look” and ”The Set List: The Music & Choreography of Burlesque”. The release will be rounded out by Sony’s movieIQ feature.