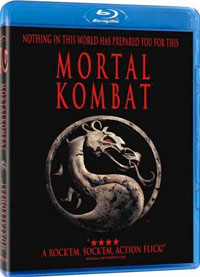 Based on the best-selling video game, “Mortal Kombat” tells of a group of expert fighters who compete in a dangerous tournament for the fate of mankind on a mysterious island.

The film will offer the animate piece Mortal Kombat: The Journey Begins as well as a Digital Copy and the film’s Theatrical Trailer along with a high definition Mortal Kombat Video Game Trailer.

In the sequel “Mortal Kombat: Annihilation,” in defiance of the Elder Lords, the evil Outworlders are back to wreak hell on Earth. Led by the mighty Shao Kahn, their gruesome goal is humanity’s complete and utter destruction. Earth’s last and only hope is the mighty martial arts warrior Liu Kang.

This movie will be supplemented with a Digital Copy, Theatrical Trailer a high definition Mortal Kombat Video Game Trailer.