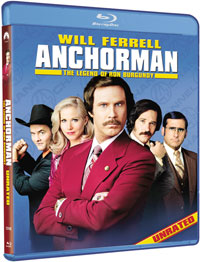 It took Dreamworks Home Entertainment surprisingly long to bring the Will Ferrell comedy Anchorman: The Legend of Ron Burgundy to Blu-Ray, but it has finally been scheduled for release in March.

Will Ferrell is Ron Burgundy, a top-rated 1970’s San Diego anchorman who believes women have a place in the newsroom – as long as they stick to covering fashion shows or late-breaking cooking news. So when Ron is told he’ll be working with a bright young newswoman (Christina Applegate) who’s beautiful, ambitious and smart enough to be more than eye candy, it’s not just a clash of two TV people with really great hair – it’s war! Filled with wicked wit and slapstick humor, Anchorman is a wildly irreverent, must see comedy hit!

Like the DVD and HD-DVD versions before, the movie will contain a host of extras, such as Bloopers and Deleted Scenes, along with a couple of in-character Featurettes and Clips. The disc will also contain an Almost Uncensored Commentary Track by Will Ferrell and Director Adam McKay. A Making Of Feaurette is also included, along with the “Afternoon Delight” Music Video.