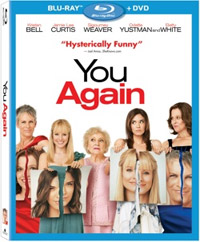 For Marnie (Kristen Bell), high school was a horror movie, and her brother’s wedding is the sequel when her archrival comes back to haunt her as his bride.  Its nice girl versus mean girl in this hysterical reunion with the one person Marnie would really like to forget. And if that weren’t enough, Marnie’s mom (Jamie Lee Curtis) reunites with her own high school nemesis (Sigourney Weaver). Complete with hilarious, never-before-seen bonus material, You Again is one crazy comedy that’ll keep you laughing again and again.

The DVD version will feature an anamorphic widescreen transfer with Dolby Digital 5.1 audio. among the extras on the disc you will find Deleted Scenes along with the Featurettes ”Following Fickman: On The Set With The Director” which allows you to peer into the madcap mind of Hollywood’s wackiest director, Andy Fickman, as he orchestrates the comedy of Kristen Bell, Sigourney Weaver, Jamie Lee Curtis and Betty White, ”Ask The Cast” in which Jaime Lee Curtis, Betty White, Sigourney Weaver and Kristen Bell answer questions from fans asking for advice, and ”Funny or Die” a behind-the-scenes interview spoof in which Jaime Lee Curtis, Betty White, Sigourney Weaver, Odette Yustman and KristenBell discuss the movie when things get tense between the actresses eventually boiling over into a cast fight.

The Blu-Ray Disc will arrive as a 2-disc combo set including also the DVD version on the second disc. It will feature a 1080p high definition transfer with DTS 5.1 HD Master Audio. The release will include the same bonus materials as the DVD version but will further spice it up with Additional Deleted Scenes and a Blooper Dance Party filled with on-set antics as the cast dances to their own beat.