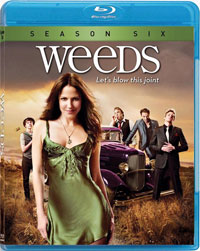 Lionsgate Home Entertainment has added Weeds: Season Six to their line-up, scheduling a DVD and Blu-Ray version of the TV series for release in February.

Let’s blow this joint!  Pot-selling soccer mom turned First Lady of the Mexican drug cartel Nancy Botwin (Emmy® and Golden Globe® winner Mary-Louise Parker) packs up her dysfunctional family and heads for the northern border in the sixth season of Showtime’s hit series, “Weeds.”  Picking up where the surprise Season Five cliffhanger left off, the Botwin clan goes on the run and assumes new identities, leaving behind their illegal operations – at least initially.

Arriving on DVD as a 3-disc set and on Blu-Ray as a 2-disc set, the release includes all 13 episodes of the latest season, which features guest stars Alanis Morissette (TV’s “Nip/Tuck”), Linda Hamilton (The Terminator), Richard Dreyfuss (JAWS) and more! The DVD and Blu-Ray bonus materials are highlighted by a Featurette with Justin Kirk and Kevin Nealon. Also included are a Gag Reel and Interviews with the cast Further you will find a Fan Question Featurette on the release, as well as Commentary Tracks on select episodes with creator Jenji Kohan and assorted cast and crew members.