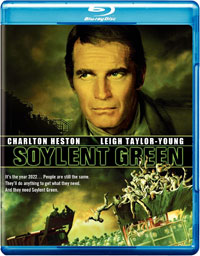 “Soylent Green” is landmark screen science-fiction, a riveting entertainment and a cautionary tale that holds a mirror to a tomorrow rife with ecological disaster. Working well again in the futuristic genre following “Planet Of The Apes” and “The Omega Man, ” action titan Charlton Heston portrays Thorn, a detective prowling the dark streets of a polluted, overpopulated Big Apple gone rotten in 2022. He’s trailing a murderer-and the trail leads to a stunning discovery. Vividly realized, “Soylent Green’s” world gains its power not just from its social effects but from its heart-a human dimension magnified by the performance of legendary Edward G. Robinson in his moving screen farewell.

Featuring a 1080p high definition transfer with high definition audio, the release will also include a Commentary Track by Charlton Heston and Leigh Taylor-Young. Two Vintage Featurettes will also be included, giving you a look at ”A Look at the World of Soylent Green” and ”MGM’s Tribute to Edward G. Robinson’s 101st Film”. The release is rounded out by the movie’s Theatrical Trailer.

“Soylent Green” can be yours to revisit in never-before seen glory on March 29 for only $19.98.