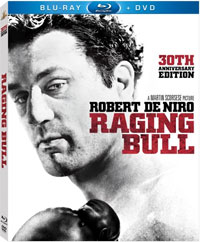 MGM Home Entertainment has announced a special 30th Anniversary Edition of Martin Scorsese’s Raging Bull to enter the ring once again, this time as a Blu-Ray/DVD combo in January.

As Jake (Robert De Niro) struggles to become the middleweight boxing champion of the world, he is obstructed by his personal demons. Though a technically brilliant fighter, his credibility as a legitimate boxer is challenged when he conspires with the mob to throw a fight in his opponent’s favor. Increasingly violent and self-destructive, Jake sours his already-tumultuous relationship with his brother and boxing manager (played by Joe Pesci) by accusing him of having an affair with his wife, Vickie (Cathy Moriarty). Jake’s final tragic loss in the ring makes him realize that his greatest defeat was losing the ones he loved.

Featuring a 1080p high definition transfer with DTS 5.1 HD Master Audio, the release will also include a number of brand new bonus materials, such as the Featurettes ”Marty & Bobby,” “Raging Bull: Reflections On A Classic,” “Remembering Jake,” Marty on Film” and ”Cathy Moriarty on The Tonight Show Starring Johnny Carson, March 27, 1981”.

Also included are the previously released extras Raging Bull: Fight Night and The Bronx Bull as well as DeNiro vs. LaMotta and LaMotta Defends Title.

Now, if anyone could perhaps explain to me why these commentaries will not been included on the Blu-Ray Disc I would be eternally grateful.