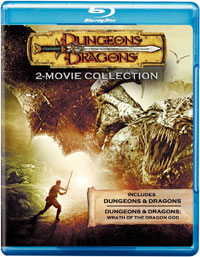 Who will be the dominator of worlds? Destiny belongs to those who dare in “Dungeons & Dragons,” a thunderous fantasy adventure inspired by the popular role-play game. Thora Birch and Marlon Wayans are among the forces of good defending the Empire of Izmer from the diabolical grasp of mage Profion (Jeremy Irons). The past is prologue when the evil returns years later to avenge what transpired in Izmer. Can five young stalwarts thwart the fiendish traps, spectral ghouls and mighty armies of hell? The answer – and the thrilling spectacle — comes in “Dungeons & Dragons: Wrath of the Dragon God.”

Apart from the movies themselves, arriving in 1080p high definition with DTS 5.1 HD Master Audio, the release will also include a series of bonus features, such as Additional Scenes, an Alternate Ending and Commentary Tracks on both movies.

the Documentary “Let the Games Begin” will also be included, along with a Making-of Featurette, Special Effects Deconstruction and the movies’ Theatrical Trailers.

Further you will find the Making-of Featurette Rolling the Dice on the release and The Arc: A Conversation with Gary Gygax.