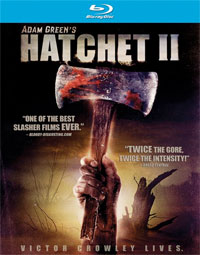 MPI Home Video has just announced the release of Adam Green’s Hatchet II as they scheduled the horror film to his retail stores in February on DVD and Blu-Ray Disc.

“Hatchet II” picks up right where the original “Hatchet” ends, as the quiet but hot-tempered Marybeth (Danielle Harris) barely escapes from the clutches of the mysterious Crowley ( Crowley (Kane Hodder), who has already has murdered all of Marybeth’s friends and other vacationers in the New Orleans’ swamp country.

Marybeth recruits a team of hired guns and returns to the bayou to exact her revenge, but quickly discovers that even with an army of hunters at her side, the murderous fury of Crowley cannot be contained. Ultimately, it will be up to Marybeth alone to defeat the seemingly indestructible Crowley, but not before learning the truth about a twisted secret he shares with her own family!

No detailed specs or features have been announced at this time, but expect the film to arrive on February 1 for $27.98 on DVD and $34.99 on Blu-Ray Disc.