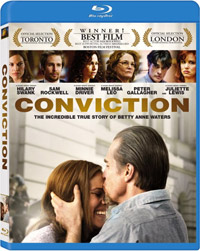 Based on the real-life journey of Betty Ann Waters, “Conviction” details the story of a courageous woman who embarked on an 18-year quest to help clear the name of her wrongly-accused brother and win back his freedom. Without a dime but armed with a strong will and an unwavering devotion, this high-school drop-out and working mother (Hilary Swank) earns her high school diploma and puts herself through law school in an effort to represent her brother (Sam Rockwell) and set the record straight. Convicted of murder, he has exhausted his chances to appeal his conviction through public defenders and needs a miracle.

The release will feature a Behind-the-scenes Interview with the real Betty Ann Waters as the only bonus feature.