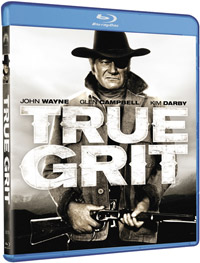 Paramount Home Entertainment has added the John Wayne western True Grit to their high definition line-up, bringing the 1970 film to Blu-Ray for the first time in December.

In 1970, John Wayne won an Academy Award. for his larger-than-life performance as the drunken, uncouth and totally fearless one-eyed U.S. Marshall, Rooster Cogburn. The cantankerous Rooster is hired by a headstrong young girl (Kim Darby) to find the man who murdered her father and fled with the family savings. When Cogburn’s employer insists on accompanying the old gunfighter, sparks fly. And the situation goes from troubled to disastrous when an inexperienced but enthusiastic Texas Ranger (Glen Campbell) joins the party. Laughter and tears punctuate the wild action in this extraordinary Western which features performances by Robert Duvall and Strother Martin.

The release features 1080p high definition transfer with DTS 5.1 HD Master Audio. Among the extras on the release you will find a Commentary Track by Jeb Rosebrook, Bob Boze Bell and J. Stuart Rosebrook. Also included are the Featurettes ”True Writing,” “Working with the Duke,” “Aspen Gold: Locations of True Grit” and “The Law and The Lawless” The disc will be rounded out by the movie’s Theatrical Trailer.