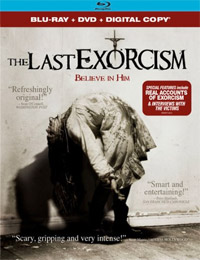 Lionsgate Home Entertainment has added The Last Exorcism to their line-up, scheduling the horror film for release on DVD and Blu-Ray Disc in January.

When he arrives on the rural Louisiana farm of Louis Sweetzer, the Reverend Cotton Marcus expects to perform just another routine “exorcism” on a disturbed religious fanatic. An earnest fundamentalist, Sweetzer has contacted the charismatic preacher as a last resort, certain his teenage daughter Nell is possessed by a demon who must be exorcized before their terrifying ordeal ends in unimaginable tragedy. Buckling under the weight of his conscience after years of parting desperate believers from their money, Cotton and his crew plan to film a confessionary documentary of this, his last exorcism. But upon his arrival at the already blood-drenched family farm, it is soon clear that nothing could have prepared him for the true evil he encounters there. Now, too late to turn back, Reverend Marcus’ own beliefs are shaken to the core as he and his crew must find a way to save Nell – and themselves – before it is too late.

Both the Blu-ray Disc and the DVD provide a deeper look into the film with two commentaries from the actors, director and producers; a “making of” the film; the 2009 Cannes Film Festival teaser trailer and a featurette that examines those involved in real life exorcisms.

In addition, the Blu-ray Disc hosts exclusive bonus materials including an additional commentary containing stories from a spiritual warfare counselor, a “haunting” victim and a clinical psychologist; audition footage from Ashley Bell and Patrick Fabian and the theatrical trailer.