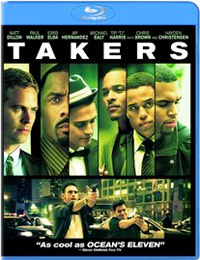 Sony Pictures Home Entertainment has slated Takers for release in January of next year, bringing the gritty film to DVD and Blu-Ray Disc.

This high-stakes action thriller stars Matt Dillon, Paul Walker, Idris Elba, Jay Hernandez, Michael Ealy and Tip “T.I.” Harris. After pulling off a spectacular series of brilliantly planned bank robberies, a notorious team of professional criminals attempts one last heist, a once-in-a-lifetime job with a $25 million payoff. And all that stands in their way is a cop hell-bent on doing whatever it takes to solve the case and bring the TAKERS down. Chris Brown and Hayden Christensen costar in an adrenaline-rushed thrill ride packed with twists and turns.

The DVD version features an anamorphic widescreen presentation with Dolby Digital 5.1 audio. The bonus materials on the release will include a Filmmaker and Cast Commentary Track along with the Promotional Music Video “Yeah Ya Know (Takers)” By T.I.

In the Blu-Ray version you will be treated to a 1080p high definition transfer with DTS 5.1 HD Master Audio. The disc will also include the Commentary Track and the Music Video but will further give you access to the Featurettes ”Executing the Heist: The Making of Takers” and ”Take Action!”. A PS3 Wallpaper Theme will also be included along with Sony’s movieIQ trivia track.