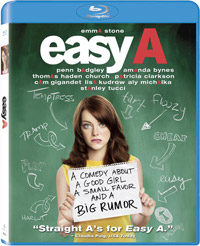 Sony Pictures Home Entertainment has added the teenage comedy Easy A to their line-up, scheduling the film for release on DVD and Blu-Ray Disc in December.

In this charming, critically acclaimed tale of rumors and reputation, Olive (Emma Stone), an average high school student, sees her below-the-radar existence turn around overnight once she decides to use the school’s gossip grapevine to advance her social standing. Now her classmates (Amanda Bynes, Aly Michalka) are turning against her and the school board is becoming concerned, including her favorite teacher (Thomas Haden Church) and the distracted guidance counselor (Lisa Kudrow). With the support of her hilariously idiosyncratic parents (Stanley Tucci, Patricia Clarkson) and a little help from a long-time crush (Penn Badgley), Olive attempts to take on her notorious new identity and crush the rumor mill once and for all.

The DVD version arrives with an anamorphic widescreen transfer and Dolby Digital 5.1 sound as well as a Commentary Track with Director Will Gluck and actress Emma Stone. Also included is a Gag Reel and Emma Stone Audition Footage.

The Blu-Ray version offers a 1080p high definition transfer of the movie with DTS 5.1 HD Master Audio. You will find the same bonus materials from the DVD on this disc, but in addition there will be the Featurettes ”The Making of Easy A,” “The School of Pop Culture: Movies of the Eighties” and ”Vocabulary of Hilarity”. A Pop-Up Trivia Track is also included along with Sony’s movieIQ feature.