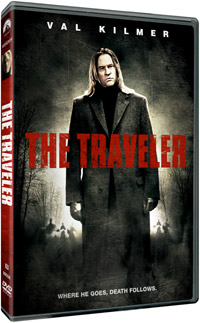 Paramount Home Entertainment has just added the horror thriller The Traveler to their release line-up, bringing the film to DVD in January.

A bloody, gruesome and relentless thriller, “The Traveler” stars Val Kilmer as a mysterious stranger whose past threatens to haunt the lives of six unsuspecting sheriff’s deputies. The moment he arrives in their small town police station confessing to multiple murders, their lives are forever changed. From the first scene to the shocking conclusion, horror fans will get more than their fair share of torture and bloodshed.

No bonus materials have been announced at this time. Expect to see “The Traveler” in stores on January 25 for $22.98.