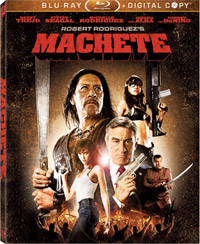 From director Robert Rodriguez, and featuring an all-star cast including Danny Trejo, Robert De Niro and Jessica Alba, comes an action-packed, bare-knuckled fistful of carnage asada! Set up, double-crossed and left for dead, Machete (Danny Trejo) is an ass-kicking ex-Federale who lays waste to anything that gets in his path. As he takes on hit men, vigilantes and a ruthless drug cartel, bullets fly, blades clash and the body count rises. Any way you slice it, vengeance has a new name — Machete.

The release will contain Exclusive Deleted Scenes that reveal never-before-seen characters, twisting plot lines, and more bloody good action! On Blu-Ray you will also get Digital Copy of the film on a separate disc, which can now be transferred to your device wirelessly also.