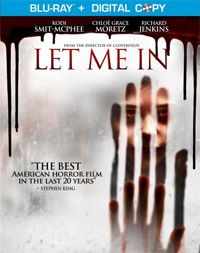 Let Me In – the title reminds me of a scene from Stephen King’s “‘Salem’s Lot” – is the latest addition to Anchor Bay Entertainment’s release line-up, as the studio will release the vampire film on DVD and Blu-Ray Disc in February.

In bleak New Mexico, a lonely, bullied boy, Owen (Kodi Smit-McPhee), forms a unique bond with his mysterious new neighbor, Abby (Chloë Grace Moretz), who moves from town to town with the man who appears to be her father (Richard Jenkins).  Trapped in the mind and body of a child, however, Abby is forced to hide a horrific secret of bloodthirsty survival.  But in a world of both tenderness and terror, how can you invite in the one friend who may unleash the ultimate nightmare?

The DVD version comes in an anamorphic widescreen presentation with Dolby Digital 5.1 audio and will also include a Audio Commentary with Writer/Director Matt Reeves. Further you will find a series of Featurettes on the disc, such as ”From the Inside: A Look at the Making of Let Me In,” “The Art of Special Effects,” and “Car Crash Sequence Step-By-Step”. A selecetion of Unrated Deleted Scenes is also included along with a Trailer Gallery: Greenband Trailer, Redband Trailer and a Poster & Still Gallery.

On Blu-Ray Disc, the release will feature a 1080p high def transfer with DTS 5.1 HD Master Audio and will include the same bonus materials found on the DVD. In addition, however, look for Dissecting Let Me In and a Digital Copy of the film.