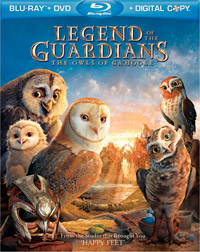 Warner Home Video has added Legend of the Guardians: The Owls of Ga’Hoole to their release line-up already, scheduling the animated movie for release on DVD and Blu-Ray in December.

Director Zack Snyder (300, Watchmen) makes his animation debut with this fantasy adventure based on the beloved books. Young owl Soren marvels at tales of the Guardians of Ga’Hoole, mythic winged warriors who battled to save all owl kind from the evil Pure Ones. When he and brother Kludd fall into the talons of the Pure Ones, it’s up to Soren to make a daring escape with the help of other brave owls and seek out the Great Tree, home of the Guardians.

The release will feature the Featurette ”True Guardians of the Earth” as well as the Looney Tunes Short “Fur of Flying”. The WB Maximum “Kid” Mode will also be included giving you the chance to “Explore the World of Ga’Hoole.” Interactive Challenges and Artwork Galleries will also be included along with the Owl City Music Video “To the Sky”.

On Blu-Ray you will also find a Digital Copy of the movie and even a 3D version of the film will be released.