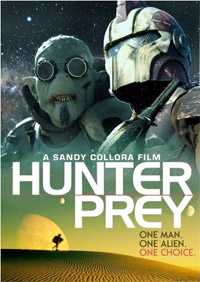 Image Entertainment has announced Hunter Prey for release on DVD in December.

The Prometheus has dropped out of orbit. Communications and life support systems are down. Situation Critical. Status of Crew and Prisoner unknown. With orders to catch their Alien Prisoner alive, the surviving crew of the spaceship Prometheus pursues a dangerous game of cat-and-mouse with their escaped prisoner on a deserted and barren planet. But, who is the hunter and who is the prey?

The DVD will feature an anamorphic widescreen transfer with Dolby Digital 5.1 audio and will also contain a number of bouns materials, such as a Commentary Track by director Sandy Collora, as well as a Behind-the-scenes Featurette.