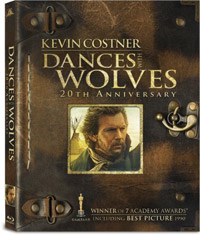 MGM Home Entertainment has just added the Kevin Costner epic Dances With Wolves for release on Blu-Ray Disc in January.

“Dances With Wolves” tells the story of Lieutenant John Dunbar (Kevin Costner) who chooses a posting on the American Frontier and is soon accepted into a local Sioux tribe. The tribe names him “Dances with Wolves” and as time passes he falls in love with the beautiful “Stands with a Fist” (played by Mary McDonnell), a white woman adopted by the Sioux when her family was killed. John’s blissful new life is soon disrupted, however, when American soldiers advance on the frontier threatening the Sioux people. John is forced to make a decision that will not only affect him, but also the lives of those he now calls his people.

Presented in 1080p high definition with DTS 7.1 HD Master Audio, the film will arrive on 2 discs as the Extended Cut with 50 minutes of additional footage and will also feature a host of bonus materials, such as a Commentary Track by Kevin Costner and Producer Jim Wilson. A Commentary Track by Director of Photography Dean Semler and Editor Neil Travis will also be included along with two new Interactive Features, the Military Rank and Social Hierarchy Guide and Real History or Movie Make Believe.

On the second disc of the release you will find the new featurette ”A Day In The Life On The Frontier”, along with the Original Making-Of Featurette and the Retrospective Documentary ”The Creation of an Epic”. The Original Music Video and Dances Photo Montage with Introduction by Ben Glass will also be included, as well as a Poster Gallery and TV Spots.