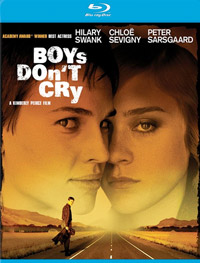 20th Century Fox Home Entertainment has also added a Blu-Ray version of Boys Don’t Cry, the film that launched Hilary Swank’s career, to their line-up, scheduling the drama for release in February.

A true story about hope, fear, and the courage it takes to be yourself, “Boys Don’t Cry” is “One of the 10 Best Films of 1999” (National Board of Review). Critically acclaimed and nominated for two Academy Awards and two Golden Globe Awards, this four-star, “must-see” (People), “riveting” (Entertainment Weekly) drama features incredible performances by newcomers Hilary Swank and Chloe Sevigny.

No detailed specs have been released yet, but expect to see the commentary Track and Featurettes from the DVD version on this disc when it arrives in stores on February 1 for $24.99.