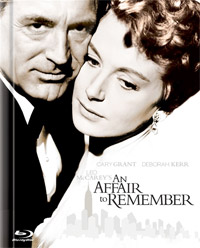 20th Century Fox Home Entertainment has just announced a Blu-Ray Disc version of the 1957 classic An Affair to Remember, scheduling the high definition debut of the beloved film for February.

In this poignant and humorous love story nominated for four Academy Awards, Cary Grant and Deborah Kerr meet on an ocean liner and fall deeply in love. Though each is engaged to someone else, they agree to meet six months later at the Empire State Building if they still feel the same way about each other. But a tragic accident prevents their rendezvous and the lover’s future takes an emotional and uncertain turn.

Although specific details have yet to be announced, expect to see the bonus materials from the 50th Anniversary Edition restored to this release also, including the Audio Commentary by Singer Marnie Nixon and Film Historian Joseph McBride, along wit hthe Featurettes ”Affairs to Remember: Deborah Kerr,” “Affairs to Remember: Cary Grant,” “Directed by Leo McCarey,” “A Producer to Remember: Jerry Wald,” and ”The Look of An Affair to Remember”.

Also, the AMC Backstory should be included on the release as well as the b>Fox Movietonews: Shipboard Premiere Attracts Celebrities.