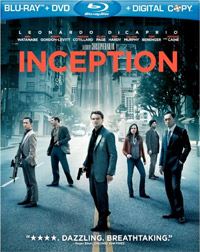 Warner Home Video has added the science fiction thriller Inception to their line-up, scheduling to bring the film to DVD and Blu-Ray Disc in December.

Acclaimed filmmaker Christopher Nolan directs an international cast in this sci-fi actioner that travels around the globe and into the world of dreams. Dom Cobb (Leonardo DiCaprio) is the best there is at extraction: stealing valuable secrets inside the subconscious during the mind’s vulnerable dream state. His skill has made him a coveted player in industrial espionage but also has made him a fugitive and cost him dearly. Now he may get a second chance if he can do the impossible: inception, planting an idea rather than stealing one. If they succeed, Cobb and his team could pull off the perfect crime. But no planning or expertise can prepare them for a dangerous enemy that seems to predict their every move. An enemy only Cobb could have seen coming.

The DVD version offers an anamorphic widescreen presentation of the film, complete with Dolby Digital 5.1 audio. In addition you will find a number of Featurettes on the disc, taking you behind the scenes of the film’sconception and making.

The Blu-Ray version, featuring a 1080p high definition transfer with DTS 5.1 HD Master Audio, will also include those Featurettes but will contain additional bonus materials, such as more Featurettes and a Video Commentary Track. Trailers and TV Spots will also be included along with BD Live features.