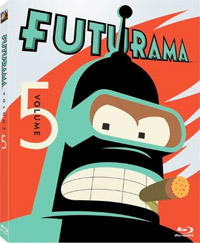 After its hiatus and re-appearance on TV, Futurama is now continuing on DVD and Blu-Ray Disc also, when 20th Century Fox Home Entertainment is releasing Volume 5 in December for the whole galaxy to own.

You asked for more… and the Planet Express crew delivered! Welcome back to Futurama, the light-years-ahead-of-its-time animated series from The Simpsons creator Matt Groening. Join Fry, Bender, Leela and the rest of the gang for 13 hilarious new episodes that tackle some of the most controversial subjects in the galaxy…including evolution, mind exchange, feline intelligence and robosexual marriage. Hey, it could happen!

Arriving on 2-discs, the release will also contain Deleted and Extended Scenes, Commentary Tracks and Featurettes including “Bend it Like Bender“, ”Previously On…“, ”Fry’s Crudely-Drawn Comic Book – The Crudely Animated Edition“, ”Behind the Fungus: Makin’ a Hit Song“ and more. ”Futurama: Volume 5″ will be in stores on December 21 for $39.98 on DVD and $49.99 on Blu-Ray Disc.