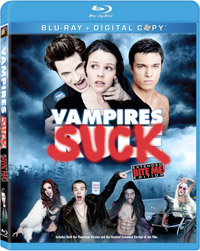 20th Century Fox Home Entertainment has added the horror comedy Vampires Suck to their release line-up, bringing the film to DVD and Blu-Ray Disc in November.

Becca, an angst-ridden teenager at a new high school, finds herself torn between two supernatural suitors: a moody vampire and an extremely hairy werewolf. From Jason Friedberg and Aaron Seltzer, two of the comedy masterminds who brought you Scary Movie, and co-starring Ken Jeong, this laugh-out-loud comedy will leave you howling for more!

The DVD version will feature an anamorphic widescreen transfer of the film’s Theatrical and Extended version with Dolby Digital 5.1 audio. Also included are five Deleted Scenes and a Gag Reel, along with the movie’s Theatrical Trailer.

The Blu-Ray version will arrive on two discs, featuring a high definition transfer of the movie in its Theatrical and Extended cut with DTS 5.1 HD Master Audio. You will find the same bonus materials on the release as those on the DVD version but look for more Deleted Scenes, BD Live and a Digital Copy of the film.