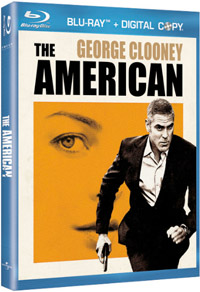 Universal Home Entertainment has just added The american to their line-up, scheduling the thriller for release on DVD and Blu-Ray Disc in December.

Academy Award® winner George Clooney is “The American” in this sexy suspense thriller from director Anton Corbijn. After a job ends more violently than expected, Jack (George Clooney) retreats to the Italian countryside and accepts one last assignment to construct a deadly weapon for a mysterious contact. But when he pursues a relationship with a beautiful local woman, he may be tempting fate by stepping out of the shadows. Jack soon finds himself in an escalating battle to escape from his secretive past.

The DVD version will feature an anamorphic widescreen version of the film with Dolby Digital 5.1 audio. No extras will be included on the release.

The Blu-Ray version will feature a 1080p high definition transfer with DTS 5.1 HD Master Audio. As the only extra the release will also contain a Digital Copy.