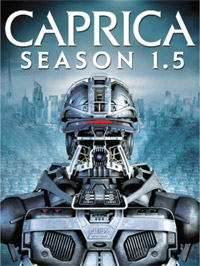 Universal Home Entertainment has added a DVD set for Caprica: Season 1.5 to their line-up, bringing the new scifi series to you in December.

The first season of the critically-acclaimed drama from Executive Producers Ronald D. Moore and David Eick comes to a thrilling climax in “Caprica Season 1.5.” Fifty-eight years before the events of “Battlestar Galactica,” mankind is wrestling with the question of what makes one human, and sealing its own fate of certain destruction. Alliances are made, secrets are revealed, and lives are forever changed while the conflict between man and machine takes shape. As the season races towards its stunning conclusion, the seeds are sown for the inevitable, brutal clash between the newly-born Cylon race and its human creators.

Arriving in anamorphic widescreen on 3 discs, and featuring Dolby Digital 5.1 audio, the release will not contain any bonus materials. Now high definition version has been announced at this time either.