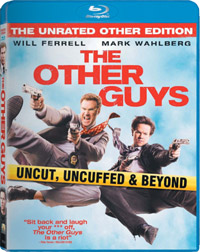 Sony Pictures Home Entertainment has just added the Will Ferrell and Mark Wahlberg comedy The Other Guys to their roster, bringing the film to DVD and Blu-Ray Disc in December.

Misfit NYPD detectives Gamble and Hoitz (Will Ferrell and Mark Wahlberg) are sentenced to life behind the desk. They hate each other and the monotony of their meaningless jobs, as they’re forced to live in the shadow of the two biggest and most badass cops on the force (Samuel L. Jackson and Dwayne Johnson). But when those guys go down for the count, opportunity knocks for Gamble and Hoitz. Stumbling onto what could be one of the biggest crimes in years, can The Other Guys step up their game to solve the case without killing each other and destroying NYC in the process?

The DVD versions will arrive as a rated and an unrated version, sold separately, each offering up the movie in anamorphic widescreen with Dolby Digital 5.1 audio. In addition, the releases will also include the Featurettes ”Crash and Burn!” and ”Bed Bath and Way Beyond”.

There will also be two Blu-Ray versions, the first one a single-disc release, featuring the film in 1080p high definition with DTS 5.1 HD Master Audio. Filled with extras, you will find Deleted & Extended Scenes on the release, as well as Alternate Action and a huge selection of Featurettes, such as ”Wasn’t That???,” “Crash and Burn!,” “Why Are There Brits In This Movie?,” “Rob Riggle Likes To Party,” “We Shouldn’t Kiss Chicken,” “Mark Wahlberg’s Eating Contest Entourage,” “Bed Bath and Way Beyond” an ”Extreme Close Up”. Line-O-Rama is another feature on the release, as well as the “Pimps Don’t Cry” Music Video. Further look for movieIQ and The “Mom”-mentary for both the rated and the unrated version of the movie.

The second version is a Blu-Ray/DVD Combo featuring pretty muc hall of the above.