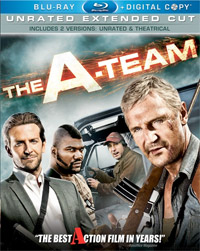 20th Century Fox Home Entertainment has just released information to release the remake of The A-Team in December on DVD and Blu-Ray Disc.

Buckle up for an adrenaline-fueled thrill ride starring Liam Neeson, Bradley Cooper, Quinton “Rampage” Jackson and Sharlto Copley. Convicted by a military court for a crime they didn’t commit, a daring team of former Special Forces soldiers must utilize their unique talents to break out of prison and tackle their toughest mission yet. It’s going to take guts, split-second timing and an arsenal of explosive weapons…this is a job for The A-Team!

The release will features and extended cut of the film featuring spectacular added footage not shown in theaters!

No details or specs have been made public yet but we will keep you posted as new information comes in.