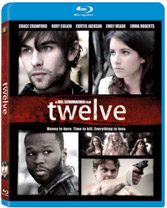 20th Century Fox Home Entertainment has just unveiled details about the upcoming release of Twelve, arriving on DVD and Bl-Ray Disc in December.

The privileged son of a restaurant tycoon, ‘White’ Mike (Chace Crawford) drops out of his Upper East Side prep school to peddle marijuana to his spoiled teenage friends on the party circuit. His drug supplier and friend Lionel (Curtis ‘50 Cent’ Jackson) introduces him to an exotic new designer drug known as “Twelve,” and Mike struggles to keep his underground lifestyle a secret from his naive friend and confidante, girl-next-door Molly (Emma Roberts). However, when Mike’s cousin is mysteriously found dead and Lionel is accused of murder, Mike’s world spirals out of control—and the drugs that made him notorious threaten to destroy his life.

No details have been announced at this time about bonus materials of final specs for the release, but keep your eyes open for the movie to drop on December 28 for $22.98 on DVD and $29.98 on Blu-Ray Disc.