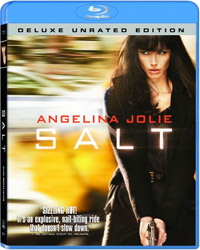 Before becoming a CIA officer, Evelyn Salt (Angelina Jolie) swore an oath to duty, honor, and country. She will prove loyal to these when a defector accuses her of being a Russian sleeper spy. Salt goes on the run, using all her skills and years of experience as a covert operative to elude capture, protect her husband, and stay one step ahead of her colleagues at the CIA.

On DVD will have the choice to pick up the movie’s Theatrical version or an Unrated version, either one presented in anamorphic widescreen with Dolby Digital 5.1 audio. Unfortunately, the release will contain no bonus materials to speak of.

The Blu-Ray version will feature a 1080p high definition transfer with DTS 5.1 HD Master Audio, offering both versions of the movie on one disc, plus a third Unrated Extended Cut of the movie. This version will also be studded with extras, such as Commentary Tracks with director Philip Noyce on all three cuts of the movie. In addition you will find a Picture-in-picture Spy Cam track on the release, along with a good number of Featurettes, including ”The Ultimate Female Action Hero,” “The Real Agents,” “Spy Disguise: The Looks of Evelyn Salt,” “The Modern Master of the Political Thriller: Phillip Noyce” and ”False Identity: Creating A New Reality”. The Release also includes “The Treatment” Radio Interview with Phillip Noyce and SALT: Declassified