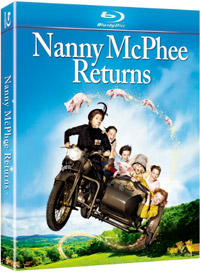 Universal Home Entertainment has added Nanny McPhee Returns to their release schedule, bringing the family film to DVD and Blu-Ray Disc in December.

Make way for more fun and hilarious mayhem as Academy Award® winner Emma Thompson reprises her role as the magical Nanny McPhee, who arrives when she’s needed the most and wanted the least. When Nanny McPhee appears at the farmhouse door of a busy young mother, Isabel Green (Maggie Gyllenhaal), she discovers that Mrs. Green’s children are in an all-out household war with their two spoiled city cousins. Relying on everything from a flying motorcycle and a statue that comes to life, to a tree-climbing piglet and an elephant that turns up in the oddest places, Nanny McPhee uses her magic to show the children five valuable lessons, the most important of which is learning how to get along.

The DVD version will feature an anamorphic widescreen transfer with dolby Digital 5.1 audio, while the Blu-Ray Disc will come with a 1080p high definition transfer and DT 5.1 HD Master Audio. No bonus materials have been announced at this time.