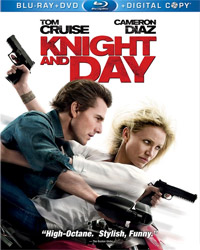 20th Century Fox Home Entertainment has just announced the home video release of Knight & Day – yes that’s the flick that prominently copied the motorcycle shootout scene from the James Bond movie, which in turn stole it from Jackie Chan’s “Police Story” at the time. The film will arrive on DVD and Blu-Ray Disc in November.

Big screen superstars Tom Cruise and Cameron Diaz come together in this fun, action-packed thrill-ride that will keep you on the edge of your seat. When a small-town girl named June (Diaz) meets a mysterious stranger, she thinks she’s found the man of her dreams. But she soon discovers he’s a fugitive super-spy, who thrusts her into a thrilling cat-and-mouse chase that spans the globe. As the bullets and sparks fly, June must decide if her “Knight” in shining armor is a dangerous traitor or the love of her life.

The DVD version will feature the Theatrical VErsion of the movie , as well as the Featurette “Wilder Knights and Crazier Days” along with Knight and “Someday”, featuring the Black Eyed Peas and Tom Cruise. Also look for the Viral Videos ”Soccer” and “Kick” and the movie’s Theatrical Trailer.

On Blu-Ray Disc you can choose from two versions. The first one a two-disc Blu-Ray/DVD combo, the other one a 3-disc Blu-Ray/DV combo with a Digital Copy of the film also.

Among the bonus materials on these versions are the Faturettes ”Wilder Knights and Crazier Days” and ”Boston Days and Spanish Knights”, as well as Knight and “Someday”, featuring the Black Eyed Peas and Tom Cruise, and the Viral Videos. In addition, this version will also include the Featurettes ”Knight and Day: Story” and ”Knight and Day: Scope”, as well as Highlight: Excerpt from Wilder Knights and Crazier Days and Not Your Regular Spy. Further, the release includes a Live LookUp option and BD Live features.