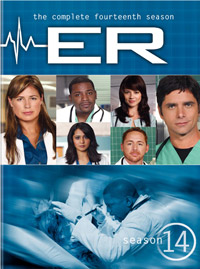 Warner Home Video has added ER: The Complete Fourteenth Season to their line-up, releasing the TV series on 5 DVD discs in January.

The doctors at Chicago’s County General Hospital are never off-duty. Over 14 seasons, so many people have come and gone, but the noble calling of saving lives and the dedication of the people who operate County General remain. In the penultimate season of this powerful, Emmy®-winning series, personal tragedies threaten — and sometimes strengthen — relationships amongst the staff. In the ER, patients often bring their own compelling stories as well. A young genius diagnoses his own mysterious illness; a cancer-ridden prison doctor is haunted by the men he put to death; and a woman arrives in the ER expecting her thirteenth baby. Triumph, loss, tears, joy…next!

Apart from all 19 episodes of the season, the release will also include Unaired Scenes and Paley Festival Panel Featurettes.