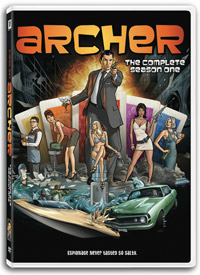 20th Century Fox Home Entertainment has just announced the upcoming release of Archer: The Complete Season One on DVD this winter, bringing this hot new animated TV series to home video for the first time.

“Archer” is set at the International Secret Intelligence Service (ISIS), a spy agency where espionage and global crises are merely opportunities for its highly trained employees to confuse, undermine, betray and royally screw each other. TIME Magazine’s James Poniewozik wrote “If you want your action parody and office sitcom all in one, Archer may well be the spy you’ll love.” Of course, he loves mother (aka The Boss) so we’re suspicious of his motives.

The 2-disc DVD set will also include the Unaired Series Pilot, a number of Making-Of Production Shorts and Deleted Scenes.