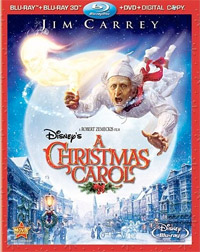 Walt Disney Studios Home Entertainment has announced the release of Robert Zemeckis’ version of A Christmas Carol for release on DVD and Blu-Ray Disc in November.

From Walt Disney Pictures comes the magical retelling of Charles Dickens’ beloved tale – Disney’s A Christmas Carol, the high-flying, heartwarming adventure for the whole family. When three ghosts take penny-pinching Scrooge on an eye-opening journey, he discovers the true meaning of Christmas – but he must act on it before it’s too late. Complete with spirited bonus features, this exhilarating and touching Disney classic is destined to be part of a family holiday tradition, adding sparkle and heart to all Christmases yet to come.

Robert Zemeckis’ unique interpretation of Charles Dickens’ beloved tale, “A Christmas Carol,” stars Jim Carrey as multiple characters including the miserly Ebenezer Scrooge and the Ghosts of Christmases Past, Present and Yet to Come, alongside with Gary Oldman, Colin Firth, Bob Hoskins and Robin Wright.

On DVD, the film will be presented in a widescreen transfer with Dolby Digital 5.1 audio. As extras you will find the Featurette ”Capturing A Christmas Carol” on the disc, in which actress Jacquie Barnbrook hosts a journey through the creative process of the movie. The Featurette ”On Set With Sammi” gives you the chance to follow Sammi Hanratty, one of the film’s young stars, as she shares a kid’s eye view of an “anything but average” day on the set. The disc will be rounded out by Deleted Scenes.

On Blu-Ray Disc you will be able to chose from two different version. First there will be the regular single-disc version, featuring a high definition presentation of the film with DTS 5.1 HD Master Audio. Among the extras you will find the material from the DVD version, with the addition of more Deleted Scenes and Behind The Carol: The Full Motion Capture Experience, a feature length picture-in-picture viewing mode takes the audience behind the scenes of motion capture filmmaking. Also included on this disc is the Countdown to Christmas Interactive Calendar in which 25 days of holiday surprises extend the holiday cheer, as  viewers come back to discover what each door holds.

In addition to this version there will also be an exclusive 4-disc Blu-Ray Combo Pack, featuring the 3D version of the movie in high definition, the standard 2D presentation in high definition, the DVD version and a Digital Copy of the film. You will find all the aforementioned extras on this release as well, of course, as well as Mr. Scrooge’s Wild Ride, a 3D bonus feature, in which director Zemeckis and the cast explain how 3D made the Dickens novella come to life. The feature explores how 3D technology brought a whole new dimension to the story, from the Ghost of Christmas Past whisking Scrooge through time, to the look and feel of the characters in 19th Century London.